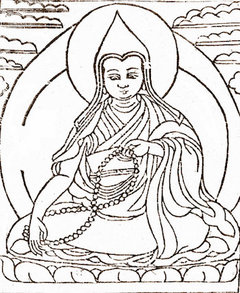 The Eight Verses of Training the Mind (blo sbyong tshigs rkang brgyad ma) by Geshe Langri Tangpa (1054-1123) is a seminal work of Tibetan literature, and surely deserves to be ranked among the world’s spiritual classics. There have been many translations, especially in recent years, largely on account of its popularity with His Holiness the Dalai Lama, who has taught it on numerous occasions all over the world. Historically however, it appears to have received less scholarly attention and inspired fewer commentaries than related works such as the Seven Points of Mind Training (blo sbyong don bdun ma) attributed to Geshe Chekawa (1101-75)—who, incidentally, also composed a commentary on the Eight Verses. Perhaps this shortage of commentarial literature explains the apparent difficulty of interpreting the very first of Langri Tangpa’s eight verses.