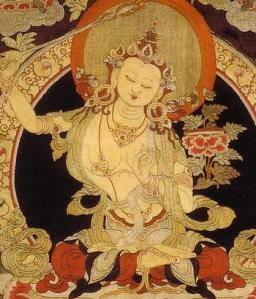 Amongst the many things Tibetans inherited from India was a sense that names, when applied to exalted beings, are far more than mere verbal labels aiding identification. Deities’ names capture something of their essence, and reciting them is a form of invocation and praise. Most mantras have names at their heart, and there are whole texts, such as Mañjuśrī–nāma-saṃgīti (Reciting the Names of Mañjuśrī), devoted to lists of alternative names or epithets.

Lamas usually have several names too, and this can obviously lead to some confusion (of the kind already discussed in a previous post). Gene Smith outlined Jamgön Kongtrul’s many names in a lengthy section of his famous introduction to the Treasury of Knowledge (Shes bya mdzod), stating:

One of the greatest problems confronting the would-be bibliographer of Tibetan literature is the plethora of names, titles and epithets by which lamas are known, especially those of the older orders. The case of Kong sprul illustrates this problem especially well. Kong sprul was given seven types of name during his life: childhood name, monastic ordination name, bodhisattva vow name, tantric initiation name, name as a rediscoverer of hidden treasure, name as a grammarian, and finally an incarnation name.[1]

This “plethora of names, titles and epithets” might pose some problems to researchers, then, but for the tradition there is a point to the profusion. As with deities, there is something more than identification at work. Lamas, too, can be called upon by name and with mantras based on their names, especially in texts of guru yoga. What’s more, their names can provide clues as to their particular character or attributes. When one guru bestows a name on another it therefore has something of the quality of prophecy. There are parallels here with vyākaraṇa, a buddha’s declaration to a bodhisattva foretelling the circumstances of their future enlightenment, including the name by which they will be known. Consider, for example, the name which Jamyang Khyentse Wangpo gave to his most learned disciple: Mipham Jamyang Namgyal Gyatso. Khenpo Kunpal explains how each of the four elements held a special significance: Mipham indicating that its bearer would realise the wisdom of the Invincible Lord Maitreya; Jamyang that he would become learned in all areas of knowledge just like Mañjughoṣa; Namgyal that he would be utterly victorious like Dharmakīrti; and Gyatso that he would attain a level of fame as vast and pervasive as the ocean. (We might call this a peculiarly Buddhist form of nominative determinism.)

Names can also point to higher truths beyond the life of the individual guru they identify. Famously, for instance, Patrul Rinpoche saw in the names Longchen Rabjam, Khyentse Özer and Gyalwe Nyugu not only a reference to three historical individuals — his immediate and indirect gurus in the transmission line of Longchen Nyingtik — but also the view, meditation and action of Dzogpachenpo.

When names can contain so many layers of meaning, it is little wonder they feature so prominently in traditional biographies, or namthar. Indeed, stating names in full can even be a hallmark of a classical writing style (or fine oratory). Yet, as the common expression (don gyi slad du mtshan nas smos na…) has it, there is also a certain purpose or beneficial effect to doing so.

But how should we deal with this in English? Richard Barron makes a compelling argument against the translation of personal names:

I am not yet ready to make the leap to translating names from Sanskrit or Tibetan into English, any more than I am to translate my given names, Richard John (which are, respectively, Teutonic and Hebrew in origin), to Stern King–Grace of God. But the whole issue remains one of amiable contention among scholars and translators.[2]

There may indeed be some contention on this score (and let us hope that it is amiable), but it is fair to say that Jigme Lingpa is much more common these days — the name, I mean — than Fearless Island Yogin, or some equivalent. 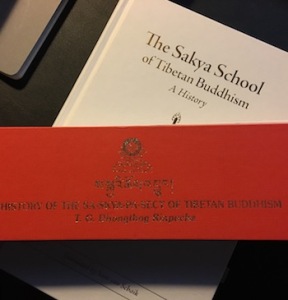 Even so, given the importance of names as indicators of qualities or future activity, sometimes it will also be necessary to provide a translation. This is the approach taken by Sam van Schaik in one section of his recent translation of Dhongthog Rinpoche’s history of the Sakya School (The Sakya School of Tibetan Buddhism, Wisdom Publications, 2016). When providing Jamyang Khyentse Wangpo’s various names — although not elsewhere — he offers an English translation together with a phonetic rendering of the Tibetan.

But what about epithets and titles? Should they be translated? Here, van Schaik appears to err on the side of nominalisation. Rather than translating an epithet such as chos kyi rgyal po (‘king of Dharma’), for example, he treats it as if it were part of the name — in this case, of Ga Rabjampa Kunga Yeshe (1397–1470).[3] Of course, strictly speaking, even Ga Rabjampa is a title rather than a name. A translation — the Rabjampa of Ga? The polymath (omni-math?) of Ga? — might reveal a little extra information (i.e., that Ga is a place), but it is rather cumbersome.

When Dhongthog Rinpoche describes the Thirteenth Dalai Lama as “the supreme victorious one, omniscient Tubten Gyatso” (rgyal mchog thams cad mkhyen pa thub bstan rgya mtsho), again van Schaik treats this as if it were simply a rather long name: Gyalchog Tamche Khyenpa Tubten Gyatso. But here too the resulting loss of information is not serious.

Yet, elsewhere in the book, when Dhongthog Rinpoche refers to Jamyang Khyentse Chökyi Lodrö (1893–1959) as “the manifestation of enlightened activity” — in other words, as the activity emanation of Jamyang Khyentse Wangpo (1820–1892) — it seems a pity to express this purely phonetically, either as Trinle Nampar Rolpa Jamyang Chokyi Lodro (p.200) or Dzongsar Khyentse Trinle Chogtrul Rinpoche Jamyang Chokyi Lodro (p.211), and thereby lose the meaning.[4]

My point here is not to criticise van Schaik’s remarkable achievement in producing what is an invaluable work of reference. I simply wish to highlight an issue in translation: where do we draw the line between a name and a description, or a name and a title? Should we translate the Jetsün in Jetsün Milarepa? How about Gyalsé Thogme Zangpo? On Lotsawa House we use a mixture of titles and names (hence Mipham Rinpoche, Jamgön Kongtrul, etc.), while some publishers, databases and encyclopaedias (including Wikipedia) discourage the use of titles altogether. Perhaps here is where the real “amiable contention” lies.

So, what is in a name? Well, for Tibetan Buddhism the answer appears to be: quite a lot. And sometimes there is even a title, epithet or descriptive phrase in there too.

If you believe that names hold some clue to your future, or at least your present character, you are likely to react to the bestowal of name by a lama with a certain degree of anticipation. Most translators — or even competent readers — of Tibetan are likely to have received requests to translate “refuge names” and will know just how seriously people can take the result. Little wonder, then, that some lamas feel the need to introduce a degree of levity into proceedings. Larry Mermelstein tells the story of how his teacher, Chögyam Trungpa Rinpoche, named him Dorje Tadrol (Limitless Vajra), before lowering his voice to a whisper and adding his own particular gloss: Cosmic Prick. And Dzongsar Khyentse Rinpoche claims responsibility for the unlikely number of people called George Bush in certain areas of the Himalayas.

The first of my own Tibetan names, which I received from Golok Tulku — or to state his proper name, Öntrul Tenpai Nyima — is Urgyen Sampel. The latter part, Sampel, is ordinarily translated as ‘wish-granting’, as it appears most commonly in phrases like ‘wish-granting tree’. In my case, however, I think it should be understood in a more literal sense, as ‘one whose thoughts (bsam) proliferate’ (‘phel), or simply, ‘one who thinks too much’ — a clear case of nominative determinism if ever there was one.

3. The index (p.281) incorrectly places him in the 12th century, while on p.224 he is said to have expanded a “meditation hall” (actually a protectors’ shrine, mgon khang, according to Dhongthog Rinpoche’s original) at Tharlam Monastery in the earth-sheep year of 1499, which must be a typo for 1439 (he died in 1470). However, I suspect that Dhongthog Rinpoche’s text itself is in error, as he wrote the work in 1976, before the biographies of Ga Rabjampa became available. Jamyang Sherab’s text clearly dates the founding of Tharlam to 1436.

4. p.216 refers to the same master as Khyentse Chökyi Nyima, but this can only be a mistake, for the words are absent in the Tibetan, and, while Khyentse Chökyi Lodrö had many names, this is not among them.