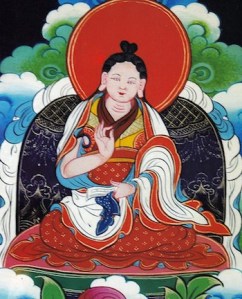 Several years ago I added a note to the Rigpa Wiki entry on Do Khyentse Yeshe Dorje (1800–1866) pointing out that a text commonly attributed to Do Khyentse is in fact by Dola Jigme Kalzang (b. 1789). The text in question is Foolish Babble Clarifying Reality: Notes on the Generation and Perfection Stages (bskyed rdzogs kyi zin bris blun gtam de nyid gsal ba). In English it appears interwoven with Ringu Tulku’s commentary in Daring Steps Toward Fearlessness (Snow Lion, 2005). Any confusion surrounding the text’s attribution seemingly stems from the fact that Dola Jigme Kalzang is also known as Zhönnu Yeshe Dorje,[1] the name that appears in Foolish Babble‘s colophon, but which is unattested in any other work by Do Khyentse. The case for the revised attribution was made even clearer in 2010 when the text was included among the collected writings of Jigme Kalzang (there referred to as Derge Jigme Kalzang) published by the Ngakmang Institute.[2]

You might well ask whether it really matters who wrote this (or any other) work. After all, it has little bearing on the actual content. It certainly matters more to the biographer or historian than it does to the average student. But association with a highly revered — and, in the case of Do Khyentse, highly unconventional — character inevitably influences how a work is perceived. And while much is known about events in the life of Do Khyentse Yeshe Dorje, biographies of Jigme Kalzang offer no more than scanty bits of information. Until recently, for example, the year of his birth was unknown, while the year of his death still remains unclear.[3]  (Incidentally, Tulku Thondup Rinpoche’s brief account of the circumstances of his death by torture in place of a condemned thief in China surely ranks among the most moving passages in Masters of Meditation and Miracles.)

Foolish Babble may represent a case of mistaken identity and confusion over names — that topic again! — that is resolved with reference to an author’s collected works. But there are also occasions when such collections seem almost designed to lead the would-be researcher astray.  Why, for instance, is Essence of Wisdom: The Means of Sustaining the Face of Awareness (Rig ngo skyong thabs ye shes snying po) included among the writings of Lala Sönam Chödrup (1862–1914)? The very same text also appears in the writings of Jamgön Mipham (1846–1912). And it is the version from this better-known collection that has been translated several times in recent years, always with Mipham named as the author. The most likely explanation for the text’s inclusion in Lala Sönam Chödrup’s corpus — discounting therefore the possibility that each wrote an identical text independently — is that a copy of Mipham’s text was found among Lala Sönam Chödrup’s possessions and mistakenly published as one of his own compositions. Why not the other way around? Well, Mipham’s seniority, in age as well as status, make this scenario less likely. In any case, it seems the researcher must be wary not only of the odd misplaced folio, but also of the occasional stray or wandering text.

Once again, however, we might wonder whether correct attribution ultimately makes much difference. The answer remains: it does, but more to the researcher than to the practitioner. Jamgön Mipham and Lala Sönam Chödrup were both important Dzogchen teachers, but while the latter is hardly known outside specialist circles, Jamgön Mipham is accorded such extraordinary reverence, especially within the Nyingma tradition, that his writings are bound to be read differently by most practitioners.

Moving from cases of confusion — both real and potential — to those of collaboration, the following question arises: If a text purportedly records the words of a teacher, should authorship be ascribed to that teacher or to the student who does the recording? To the speaker, in other words, or to the scribe? The idea of crediting a mere amanuensis might seem a little odd, comparable to attributing the sūtras to Ānanda rather than the Buddha, but the practice is nonetheless quite common.

Among the best known examples is Kunzang Lama’i Shelung, which tradition consistently attributes to Dza Patrul Rinpoche (1808–1887) rather than his ‘perfect teacher’, the Samantabhadra Guru (kunzang lama) of the title, Jigme Gyalwe Nyugu (1765–1842). Even if Patrul Rinpoche denied it,[4] there can be little doubt that he contributed much to the work’s final form and content. It is he who provides the authorial voice, for example, adopting the first person (more than once) to write: “As my revered master used to say…”[5], when clearly referring to Jigme Gyalwe Nyugu. Moreover, as he states in the colophon, he wrote the text after his teacher’s death, apparently relying on memory in lieu of written notes.

Khenpo Ngawang Palzang’s (1879–1941) Notes on Kunzang Lama’i Shelung comes closer than Patrul Rinpoche’s text to being a simple transcript. Its authorial voice is not that of Ngawang Palzang himself, but of his teacher, Nyoshul Lungtok Tenpe Nyima (1829–1901/2). Thus, although the text records Nyoshul Lungtok apparently verbatim in comments such as, “As Abu [i.e., Patrul Rinpoche] used to say…,” there is no corresponding phrase referring to Nyoshul Lungtok. In fact, Nyoshul Lungtok is not mentioned at any point other than in the colophon. Ngawang Palzang reportedly compiled the text from notes based on two separate sets of teachings, hurriedly combining and editing them many years after the event. Yet in spite of his apparently minor contribution to the text (when compared with that of Patrul Rinpoche for Kunzang Lama’i Shelung), he is still identified as the text’s author and listed as such on the cover of modern editions.

Elsewhere, however, there are cases of dual attribution. For example, Notes on the Eight Difficult Points (dKa’ gnad/gnas brgyad kyi zin bris), a foundational text for the Gelug understanding of Madhyamaka, appears in the collected writings of both Tsongkhapa Lobzang Drakpa (1357–1419) and his student Gyaltsab Darma Rinchen (1364–1432). (To complicate matters further, there are two different versions of the same text included among Gyaltsab Darma Rinchen’s works.) Arguably this is the most logical approach to take whenever a senior disciple records the words of a senior teacher and both make some contribution, even if the practice involves duplication — surely less of a problem in the modern electronic age than it was in the bygone era of xylography.

But, finally, does it really matter whose name appears on a book — or in whose collection a text appears — as long as the story of its composition is well-known and the involvement of others made clear? Let us say this much for now: it is intriguing that a tradition which values humility and places such great emphasis on the fidelity of transmission should at times (and for whatever reason) credit the student/scribe in place of the teacher/speaker. And this too: even where there is no confusion about an author’s name or a text’s location, the topic of authorship is not always as straightforward as a reader might suspect or a publisher might wish.[8]

Enough, now, of this foolish babble.

1. As Tulku Thondup Rinpoche noted in Masters of Meditation and Miracles, 173. It was Alak Zenkar Rinpoche who first pointed out to me the source of the apparent confusion and the fact that Do Khyentse Yeshe Dorje was not the author — something he is of course more than qualified to do as Do Khyentse’s incarnation. He said that Zhönnu Yeshe Dorje refers only to Dola Jigme, even though Do Khyentse is sometimes known as Kyebu Yeshe Dorje, or even simply Yeshe Dorje. (Do Khyentse also signs many texts as Jalü Dorje or as Traktung Lekyi Pawo (khrag ‘thung las kyi dpa’ bo).

2. sDe dge ‘jigs med skal bzang sku phreng snga phyi’i gsung rtsom phyogs bsgrigs 33–43. The work appears alongside other Vajrayāna texts such as notes on Jigme Lingpa’s Ladder to Akaniṣṭha. Although the text was also included in a recent edition of Do Khyentse’s collected revelations (gter chos), Zenkar Rinpoche insists that he is “certain” that it is by Dola Jigme, not Do Khyentse.

3. The biography that prefaces the 2010 edition of his collected writings gives the year of his birth as 1789. Previous biographies noted simply that he was born some time in the 18th Century.

4. E.g., Patrul Rinpoche, 1998: 369: “My main aim has simply been to record faithfully the oral instructions of my revered teacher in a way that is easy to understand and useful for the mind. I have done my best not to spoil them by mixing in my own words or ideas.”

8. And that is even without invoking anything so rarefied as Barthesian insights or the increasingly popular notion of tradents.

Khenpo Ngawang Pelzang. A Guide to the Words of My Perfect Teacher. Translated by Dipamkara and Padmakara Translation Group. Boston: Shambhala. 2004.